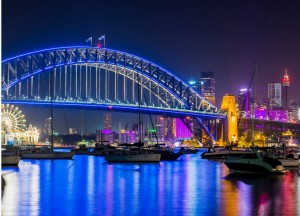 The city of Sydney in Australia has scooped top honours at the 2015 Pacific Asia Travel Association Grand and Gold Awards.

The city has been honoured for its’ highly successful Vivid Sydney annual festival which has been voted a world leading event and honoured with the Gold Award in the Marketing – State Government Destination category, recognising State or city tourism organisations..

Stuart Ayres, Minister for Trade, Tourism and Major Events, said: “The popularity of Vivid Sydney continues to increase with 1.7 million people visiting the festival this year on the back of this campaign. This included the sale of over 26,000 international Vivid Sydney travel packages with more than 11,000 packages sold to China.”

The Pacific Asia Travel Association Awards highlight exceptional achievement in a range of activities in the Asia Pacific travel industry. There were 269 entries from 83 travel and tourism organisations and individuals across the world in this year’s awards.

It’s the third time Sydney has won plaudits for its travel and marketing efforts. The city was awarded Best Tourism Event in 2013 and 2014 at the Australian Event Awards, the top national awards for the events industry.