Record New Year in Brisbane • Are you thinking Australia? | thinkingaustralia | 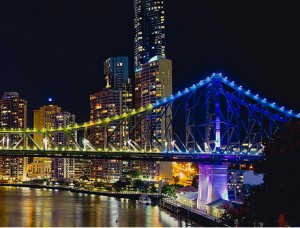 Brisbane in Australia will be lit up by more than 30,000 fireworks on New Year’s Eve during the biggest display ever seen in the city.

Over 100,000 people are set to attend celebrations at South Bank in Brisbane while a further 50,000 will welcome 2016 at events in Surfers Paradise. For the first time two new precincts will join the midnight fireworks display.

Synchronised fireworks displays will be set off at Hamilton’s Portside Wharf and Eagle Street Pier as well as at three traditional sites around South Bank. The event will see fireworks set off from five barges and three rooftops, all set to light up the sky between 8:30pm and midnight.

Organisers have spent five days setting up explosives on barges and setting up fireworks on rooftops. Around five tonnes of fireworks will be used across both displays that will feature around 30,000 individual pyrotechnic effects.

There will be free public transport on TransLink services from 9:00pm on New Years’ Eve until 5.30am on New Year’s Day.

There will be more than 500 extra buses in entertainment hotspots and extra ferry, train and tram services into the early hours. Extra trams will also run on the Gold Coast, coming every 7.5 minutes from 7:00pm to 2:00am. Extra bus services will also run across the Sunshine Coast.