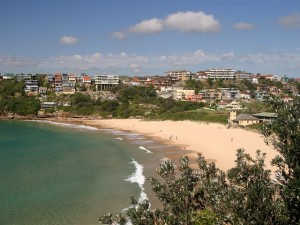 While Sydney and Brisbane are seeing their housing markets slowing down, suburbs in regional areas of New South Wales are seeing more growth than the major cities.

Recent figures show sales activity across Sydney has fallen by around 60% in the past six months, with only 36 growth suburbs compared to 114 at the start of the year. As recent rising prices deter people from buying in the capitals, savvy home-buyers are looking outside city centres where property prices are cheaper.

Regional New South Wales – places like Wollongong and Gosford – has almost double the number of growth markets than Sydney. Gosford LGA remains the most buoyant regional NSW market, followed by Wyong. The Newcastle region – of Newcastle, Lake Macquarie, Maitland, Cessnock and Port Stephens, are also witnessing growth in the suburbs.

Areas such as Freshwater (pictured) have long been popular destinations for home-buyers seeking a quieter life outside the city.

The Southern Highlands market is also on the rise with growth in Moss Vale, Bowral and Mittagong. Port Macquarie meanwhile is growing too, along with the Tweed region on the Queensland border. And the cities of Albury and Wodonga on the Victoria border are also fast-rising growth areas. One of the strongest regional economies in NSW is Dubbo, with Goulburn and Orange close behind in growth activity.

Biggest growth areas in Brisbane are Brisbane City Southside and further south Logan City. Upwardly-mobile suburbs of Redland, Ipswich and Moreton Bay LGAs are growing at the edges of the metropolitan area.

The Sunshine Coast is the next biggest growth market, with Cairns also expanding. But the Fraser Coast region based around Hervey Bay is currently seeing more growth suburbs than Cairns.

In all, New South Wales and Queensland have the highest number of regional growth markets, offering home-buyers a more affordable range of properties than the high-cost living available in cities such as Sydney or Melbourne