New planes for Qantas Australia • Are you thinking Australia? | thinkingaustralia | 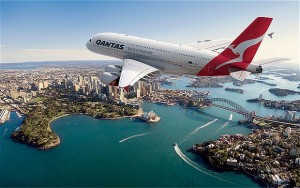 Qantas is to buy a fleet of new Boeing 787-9 Dreamliners for use on its international routes to and from Australia.

The news comes this week after the Australian airline announced pre-tax profit of $975 million for the year driven by a major turnaround in its business. With profits now up after big losses in 2014, Quantas is forging ahead with major changes to its operations.

“We are halfway through the biggest and fastest transformation in our history,” said Qantas chief executive Alan Joyce who reported that profits have been boosted by a 3% rise in passenger revenue and a $597 million reduction in fuel costs.

The new 787s, smaller than 747 jumbos that Quantas currently fly on international routes, will reduce fuel consumption, cut maintenance costs and open up new destinations as the airline will ultimately have more planes to fly.

The new Quantas 787-9 Dreamliners will begin operations to and from Australia in late 2017.