Moving to Australia where Sydney was also ranked a world Top 10 city. 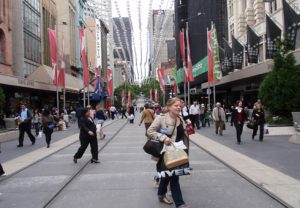 Moving to Australia: Melbourne scored higher than 34 other cities for attributes such as work-life balance, leisure activities, friendly locals and weather.

More than 14,000 expats responded to the survey by InterNations. Respondents were asked to rate more than 30 different aspects of life abroad including quality of life, ease of settling in, cost of living and weather.

Sydney was ranked in the top 10 of best cities, coming in eighth, for ease of settling in and leisure options.

Houston, Texas, was ranked second overall, then the Spanish capital Madrid followed by the German city of Dusseldorf and Singapore in fifth place.

Vienna and Munich finished ahead of Sydney, with Mexico City and Toronto rounding out the top ten.

The study showed that ex-pats in Sydney were not happy with their financial situation but loved the local weather and the friendly attitude towards foreign residents.

Ex-pats are happier in Melbourne and they are more satisfied with their personal finances.

Melbourne comes in on an average 14th place in the Personal Finance Index, whereas Sydney ranks 30th out of 35 cities.

The overall satisfaction among expats living in Australia was above average.

Thirty per cent of all respondents in Australia are so happy with their lives, that they have obtained the citizenship of their destination, noticeably more than the global average of 11 per cent.

A total of 85 destinations were considered for the list by booking site TravelBird, with Melbourne the only Australian city to be included.
It was ranked the 20th most inspiring “summer city” and 69th overall.

The criteria on which cities were judged included the number of performing arts companies, art schools and galleries, museums and “inspired romance”.

Are you planning on moving to Australia? Click here for expert help: Skilled Migration to Australia