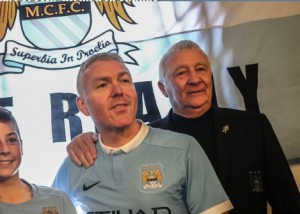 Manchester City fans in Melbourne got a treat when Raheem Sterling paid a visit to the city’s Official Supporters Club.

New signing Sterling turned up with veteran player Mike Summerbee (pictured) during the club’s recent pre-season tour of Australia to meet a group of fans who gather in the early hours of the night down under to support the English club.

The Aussie supporters are known as ‘bananas in pyjamas’ due to the time difference between the two countries and their staying up all night to watch Man City play matches in UK.

Supporters Club secretary Steve Bardsley grew up in Manchester but emigrated to Australia in 1975, while most other fans were born and bred in Melbourne.

There has been a direct link between the Premiere League club and the city of Melbourne since Manchester City have acquired a financial stake in one of Melbourne’s local A-League clubs.