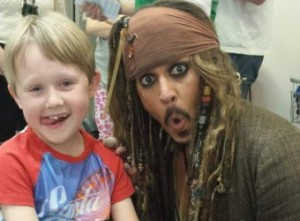 Johnny Depp paid a surprise visit to a children’s hospital in Brisbane and brought joy to dozens of sick kids.

The Pirates of Caribbean star took time to speak with all the bed-ridden kids and was happy to pose for pictures dressed in his Jack Sparrow pirate costume. 52yr-old Johnny asked staff not to publicise his private visit to the Lady Cilento Children’s Hospital but parents quickly uploaded details of the visit to social media sites.

The star arrived at the hospital by helicopter then went from room to room seeing all the kids who couldn’t get out of bed. “He came on the condition that he wasn’t pushed along and crowded by adults and he could spend as much time as he wanted with the kids. He was taking his time to make sure he spoke to each and every one of them”, revealed the mother of one sick child.

Depp is on the Gold Coast of Queensland to film Pirates of Caribbean 5: Dead Men Tell No Tales. Some scenes have been filmed in Raby Bay Harbour, east of Brisbane.