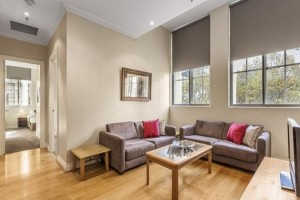 Movie star Hugh Jackman has sold his Melbourne apartment for $740,000.

The Australian actor, star of hit movies such as X-Men and who appears as pirate Blackbeard in the new Peter Pan movie, owns a number of properties in Australia and Los Angeles and has decided to divest himself of the two-bedroom apartment.

Jackman bought the property in Melbourne 20 years ago and, thanks to a booming market that has seen prices soar, the actor is set to make a tidy profit from the sale.

The modern-looking fourth-floor flat is located in the centre of Melbourne and is surrounded by tall buildings. Inside, the apartment has wooden floorboards and neutral-coloured walls and large windows that offer plenty of natural light. The kitchen has granite work surfaces and white tiles while the two bedrooms are painted in relaxing neutral colours.