Flag raising ceremony in Hobart • Are you thinking Australia? | thinkingaustralia | 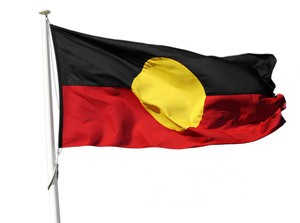 Celebration of the multi-cultural society in Australia took place in Hobart with a ceremony to mark the raising of the official Aboriginal Flag.

The Aboriginal flag is an official flag of Australia and was recognised under Federal legislation in July 1995. Designed by Aboriginal Elder Harold Thomas the flag symbolises Aboriginal identity. The top half of the flag is black to represent the Aboriginal people. The red in the lower half represents the red earth (the relationship to the land) and the red ochre used in Aboriginal ceremonies. The circle of yellow represents the sun (giver of life) and yellow ochre.

A series of special Raising Ceremonies was held at the Tasmanian Aboriginal Centre in Hobart, Tasmania.