Firms compete for talent in Australia • Are you thinking Australia? | thinkingaustralia |

Firms compete for talent in Australia 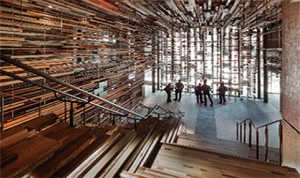 Competition for skilled workers among employers in Australia has led to major improvements in office design.

The booming economy in Australia is forcing companies to invest in latest interior design in order to attract and retain staff, says the winner of the Offices category at this year’s Inside Festival.

“Competing for the best talent is a serious issue. A lot of companies now see their workplace environment as a key part of their job offer,” Rob Backhouse, MD of award-winning architecture firm Hassell, told reporters.

‘Inside’ is an interior design festival held in tandem with the World Architecture Festival in Singapore.

The overall winner was the lobby and bar at Hotel Hotel in Canberra, designed by Melbourne-based March Studio. And Australian company Cox Rayner Architects won the health and education category for its University of Queensland Oral Health Centre.

Hassell won the Offices category for the Medibank building in Melbourne – now a new HQ for a major insurance company.

And modern design pays dividends, according to a survey of Medibank staff. 79% said their new building made them feel more collaborative, 70% said they felt healthier and 66% said they felt more productive. The company also reported a 5% fall in absenteeism since the move to the new headquarters.