Firework celebrations in Darwin • Are you thinking Australia? | thinkingaustralia | 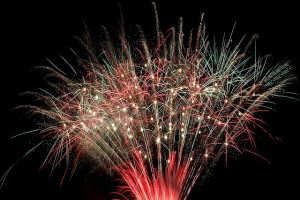 July 1st in Northern territory is the annual ‘cracker day’ when tens of thousands celebrate their independence with giant firework displays.

Just like Guy Fawkes day (Nov 5th) in Britain, the night sky is lit up with exploding fireworks from public displays and DIY celebrations among households across the city and state.

Residents of Darwin will gather at Mindil Beach to watch a big professional display while families load up the Barbie and set off fireworks such as Bad Neighbour, Peace Keeper, Little Angrys, Backyard Blitz and Bumble Bees. Despite noise complaints and injuries – 15 people hospitalised in 2013 – the tradition is fiercely protected by locals and no political party dares, like every other state in Australia, to outlaw private fireworks.

July 1st is significant because it celebrates the ruling that allowed the Northern Territory to govern itself.

On January 1, 1901, the British Parliament ceded control of its Australian colony. On July 1, 1978, Canberra officially handed the Northern Territory the right to govern itself. Then chief minister Paul Everingham declared: “The public firing of fireworks will be permitted on 1 July each year as a more appropriate way to celebrate the continuing tradition of the Westminster system of government.”