Cook Street in Port Melbourne, leading to the Vegemite head office, has been renamed in an official ceremony to celebrate the world-famous Aussie spread. 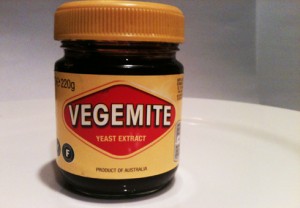 Vegemite Way was described by Melbourne lord mayor Robert Doyle as a “fitting” toast to the country’s much loved spread.

“We feel proud to have gifted the local community with Vegemite Way, a permanent marker that signifies the importance of the brand not only locally but nationally,” he told reporters.

The Vegemite story goes back 93 years.

In 1922 the Fred Walker Company, later to become Kraft Food Company, hired a young Australian chemist, Cyril Callister, to develop a spread from one of the richest known natural sources in the Vitamin B group – brewer’s yeast.

After months of tests, Dr Callister, Australia’s leading food technologist of the 1920s and 30s, developed a tasty spreadable paste. It was labelled ‘Pure Vegetable Extract’.

The Australian public officially named the new spread in a national competition that offered £50 in prize money. Fred Walker’s daughter chose the winning name – VEGEMITE – out of hundreds of entries.

In 1923, Vegemite graced the shelves of grocers across Australia as was sold as: “Delicious on sandwiches and toast, and improving the flavours of soups, stews and gravies.”

But Marmite, a somewhat similar product, already dominated the Australian market and Australians were reluctant to even try Vegemite. It eventually took 14 years for Australians to embrace what is now a national icon.

Kraft Foods recently announced that the one billionth jar of Vegemite has been produced in Port Melbourne. Cyril Callister would doubtless be proud to walk to work along Australia’s new ‘Vegemite Way’.