50 years of Australia money • Are you thinking Australia? | thinkingaustralia | 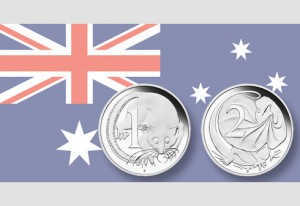 Australia will this year celebrate 50 years of being able to mint its’ own money.

On Feb 14 1966 Australia started using decimal notes and coins and began minting its’ own money. For 250 years Australia’s currency had been based on British pounds, shillings, and pence.

To celebrate the 50th anniversary of this important event in Australian history, the Perth Mint has issued two 1-ounce silver coins featuring the original designs of 1966.

The 2016 commemorative coins are available in a two-coin set, with mintage limited to 2,000 sets. The coins are housed in a classic display case that includes a pouch containing original 1- and 2-cent coins, one of each. The case is packaged within an illustrated shipper and is accompanied by a numbered certificate of authenticity. The two-coin set costs $119.95.

Perth Mint produced most of the coinage for Australia’s conversion to decimal currency, striking over 105 million coins prior to the change-over.