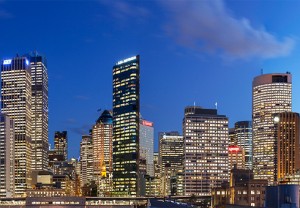 Sydney is growing by 1,600 people each week. If growth continues at current rate the city’s population will reach 5 million during 2016.

Sydney remains an engine-room of the Australian economy and its’ growth reflects this. Most of the city’s growth has occurred in the outer suburbs and around the city centre.

Waterloo – Beaconsfield in the inner-city had the largest growth of all areas in the state, increasing by 3,100 people.

Cobbitty – Leppington in the outer south-west has the fastest growth rate, rising by 26 per cent. And it also has the second-highest growth, rising by 2,600 people, ahead of Homebush Bay – Silverwater at 2,400 and Parklea – Kellyville Ridge with 1,700 new residents.

Outside of Sydney, areas with the largest growth are Maitland – West in the Hunter Valley that has increased by 660 people and Wollongong which has grown by 590.

Eight of the ten most densely populated areas in Australia are in Sydney, with the top five located around the Central Business District. Pyrmont – Ultimo has the highest population density in the country at 15,100 people per square km, according to the Australian Bureau of Statistics.