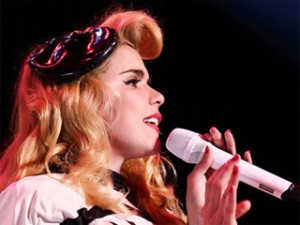 Illness has forced Paloma Faith to cancel her debut tour of Australia.

The chart-topping British singer managed to perform just one concert in Australia before a mystery illness forced to scrap the remaining five shows. Faith, who was voted best British female artist at this years’ Brit Awards, began her first down under tour in Melbourne on May 5 and was due to perform six concerts.

But she dramatically cancelled the tour before her second show at Sydney’s State Theatre. The concert was rescheduled for the following night, but was subsequently called off. And following medical advice, she’s cancelled the remaining shows in Adelaide (AEC Theatre on May 14) and Perth (Concert Hall on May 16). The singer said that she’s not yet well enough to fly, and that she plans to have tests on her return home to “see what the root cause is.”

Promoters Live Nation Australia are now planning to reschedule the tour for a later date. Faith’s last album A Perfect Contradiction reached no 5 in the Aussie charts.