A spectacular high-speed crash, an engine fire and some great overtaking moves made the Melbourne F1 Grand Prix a fitting start to the 2016 F1 season. 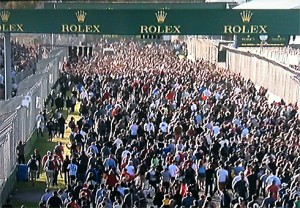 Melbourne F1 – Pole-sitter Lewis Hamilton dropped to sixth after a bad start but soon fought back to take second place behind Sebastian Vettel.

Melbourne F1 – Rosberg seemed to have the better chance of a podium in the second Mercedes as the Ferrari’s appeared to dominate.

Approaching turn three on Lap 17, Fernando Alonso suffered a terrifying accident when he collided with Esteban Gutierrez in the Haas car. Alonso’s car spun out of control, rolled over and flew through the air, coming to rest upside down in the barriers. The double world champion managed to climb out of his car uninjured.

When the race re-started, Rosberg had changed tyre strategy and managed to take the lead ahead of Ferrari’s Sebastian Vettel. 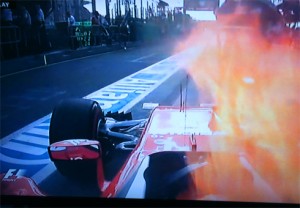 Mercedes’ chances of a double podium win at the Melbourne F1 Grand Prix were helped when Kimi Raikkonen’s Ferrari caught fire in the pits (pictured right) and he had to retire on lap 24.

At the finish, Rosberg took the chequered flag with Hamilton second and Vettel in third place. Australian driver Daniel Ricciardo came fourth in the Red Bull.

British driver Jolyon Palmer showed some great driving skill and was set to win points until he was passed by the Toro Rosso cars and ended up 11th ahead of team-mate Kevin Magnussen.  McLaren’s Jenson Button suffered with low speed all race and finished in 14th place. 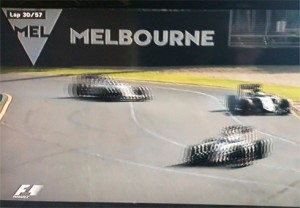 Australia has played host to Formula One motor sport since 1985 when the event first took place in Adelaide.

In 1993 the Government of Victoria signed a deal to stage the F1 event in Melbourne and set about preparing the circuit in Melbourne’s beautiful Albert Park with part of the track using closed-off public roads.

In 1996 the city staged the first Melbourne F1 Grand Prix and it has been the opening race of the F1 season ever since.