After arriving to a packed stadium in Naples that was ill-equipped for their stage show, things went from bad to worse when Iron Maiden were threatened with a live grenade. 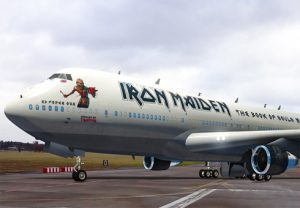 Once Iron Maiden discovered that there was insufficient electricity in the venue to power their stage gear the band was dubious about being able to play.

Singer Bruce Dickinson reveals, “The concert was total chaos – there was no way we could perform, and we told them so.

“The promoter hit the roof. He pulled out a live grenade, shoved it in my face and threatened to pull the pin if we didn’t go on stage. He simply said: ‘No concert – no Iron Maiden!’”

Needless to say the group played the concert – then left town as quickly as they could.

Hailing from England, Iron Maiden battled for years to make the big time and remain one of the biggest grossing bands in rock history.

The group played their first gig together in the mid-70s. Reflecting on this time, guitarist Dave Murray said, “We were so broke we had to sleep in our transit van. It was tough – we’d often wake up and find an inch of frost covering our stage gear.”

Proving that a bit of persistence really can pay off, after years of touring and releasing some of the finest rock records ever made the group became chart-toppers all over the world. In fact, Iron Maiden boasts one of the most loyal and hardcore followings in rock.

Money from the band’s ear-splitting records and tours has boosted the UK economy by an estimated £450 million during their long career. They’ve notched up over 35 million album sales worldwide and earned £100 million from tour merchandising alone.

Singer Bruce Dickinson quit the group for a short while to launch a solo career and pursue his love of flying. Bruce now operates his own airline that’s based in Wales, UK, and he pilots the plane the band uses on their world tours.

Group leader Steve Harris said: “Iron Maiden has always been about honesty. After all we’ve been through together we refuse to start cheating on our fans now.”

If you’d like to know more about coming to Australia, including Australian travel visas, check out thinkingaustralia’s Travel to Australia section.