Culture Club will tour Australia in June and it will be the first time the eighties band has performed down under in 16 years. 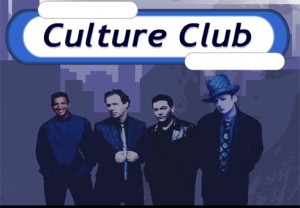 Culture Club, fronted by singer Boy George, will appear onstage in their original line-up with all four founder members.

Culture Club say they will perform concerts in the cities of Perth, Melbourne, Sydney and Brisbane. Culture Club fans in other Australian cities have expressed anger because the group will not play shows in Adelaide, Brisbane or Hobart.

Support act on the tour is ’80s band Kids In The Kitchen.

And Aussie singer Dannii Minogue will be the support act at the Culture Club concert in Melbourne. It will be the first time Kylie’s younger sister has performed in her hometown since 1998.

Australian-based ABBA tribute band will Bjorn Again will be the support act at concerts in Sydney and Brisbane.

Culture Club last released an album, Don’t Mind If I Do, in 1999. The group has re-united a few times since then with a variety of line-ups. They performed at a New Year’s Eve show in Sydney in 2011 without drummer Jon Moss.

The group has been working on a new album, called Tribes, to accompany their latest world tour. But no release date has been announced.

Culture Club shot to fame in 1982 with their debut single Do You Really Want To Hurt Me. The song reached number one in music charts in 12 countries around the world. And in 1993 the band won a top Grammy Award for Best New Artist.

Over the next four years Culture Club released three albums which sold over 50 million copies worldwide.

But Boy George’s problems with heroin, and a breakdown in band relationships, forced the group to split.

Culture Club reunited in 1998 and released an album, Storytellers, to accompany their comeback world tour.