Construction jobs for Melbourne • Are you thinking Australia? | thinkingaustralia |

Thousands of new construction jobs will be created as Melbourne city centre undergoes a major transformation with a string of new building projects. 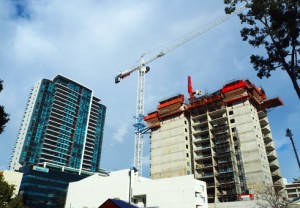 Melbourne will see a major boost in construction jobs with new high-rise residential properties, sporting venues and major infrastructure projects being built in the city.

“These new projects are great news for skilled workers and tradespeople seeking work in Australia,” says Darrell Todd, founder of thinkingaustralia. “The building boom will create thousands of construction jobs.”

The scale of new building work in Melbourne can already be seen with around 160 giant cranes now at work across the city skyline.

A total of 110 new construction projects totalling $42 billion are either underway or planned for the near future with individual projects costing from $25 million to $11 billion.

“The population of Melbourne is growing fast and these new construction projects reflect both the rising investment and confidence in the city,” says Darrell Todd.

The new developments will have a major impact across the city, providing an additional boost to office and retail property, subdivision land, car parks, shopping centres, hotels and residential development.

The construction boom is being fuelled by Melbourne’s fast-growing population which is forecast to double to eight million by 2050. Tourists and students are now attracted to the city in record numbers. And housing, retail and leisure industries are booming.

Want to live and work Down Under? Click here for more info: Skilled Migration to Australia