Australia has a new warship • Are you thinking Australia? | thinkingaustralia |

Australia has a new warship 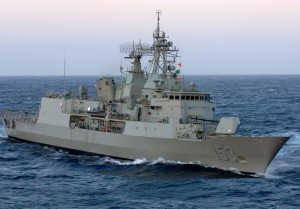 Australia has a new warship, a destroyer called HMAS Hobart.

Vice Admiral Tim Barrett says HMAS Hobart, and the next two air warfare destroyers to be built, will herald a major change in the way the navy operates.

The new ship has the ability to launch helicopters, it carries Aegis combat systems and a range of anti-aircraft armaments.

“This ship offers a capability that the navy has not had for quite some time, indeed in some areas that we have never had,” Vice Admiral Barrett said at the launch ceremony in Adelaide. “I am very pleased with the results that we see as she enters the water.”