Australia airline is worlds’ safest • Are you thinking Australia? | thinkingaustralia | 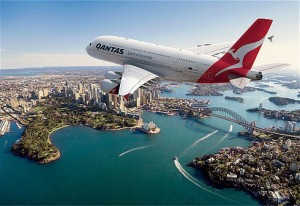 Qantas in Australia has been named the worlds’ safest airline for the third year running.

The airline, as famous a symbol of Australia as the kangaroo, was praised for its ‘extraordinary fatality-free record in the jet era’ and its’ ‘extraordinary record of firsts’.

During its’ 95-year history Qantas, the world’s oldest continuously operating airline, has achieved an extraordinary record of firsts in operations and safety and is recognised worldwide as the industry’s most experienced carrier.

The Australian airline has been a leader in the development of the Future Air Navigation System; the Flight Data Recorder to monitor plane and later crew performance; automatic landings using Global Navigation Satellite System as well as precision approaches around mountains in cloud using RNP.

Qantas was also praised as the lead airline with real time monitoring of its jet engines using satellite communications, enabling problems to be detected before they become a safety issue.

407 airlines were examined and awarded up to seven stars for safety. 148 carriers were given a top seven-star safety ranking, but around 50 airlines had just three stars or less. There are 10 airlines with only one star and these airlines are from Indonesia, Nepal and Surinam.

In 2015 the world’s airlines carried a record 3.6 billion passengers on 34 million flights.