Adelaide to test driverless cars • Are you thinking Australia? | thinkingaustralia | 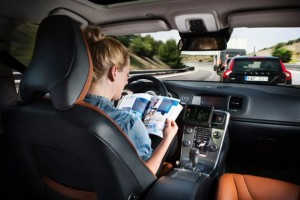 Adelaide will play host to the first on-road trials of driverless cars to be staged in the Southern Hemisphere.

Car-maker Volvo will conduct a series of on-road tests in South Australia as part of an international conference on driverless cars to be held in Adelaide. Volvo will use the same vehicle featured in similar tests in Sweden.

South Australia legalized the use of driverless cars on its roads earlier this year and the trials are part of research agency ARRB’s Australian Driverless Vehicle Initiative.

“We aim to establish how driverless technology needs to be manufactured and introduced for uniquely Australian driving behaviour, our climate and road conditions, including what this means for Australia’s national road infrastructure, markings, surfaces and roadside signage,” said Gerard Walton, MD of ARRB.

The driverless car trials will take place south of Adelaide on Nov 7 and 8. Multiple vehicles will conduct manoeuvres such as overtaking, lane changing, emergency braking and the use of on and off ramps. The International Driverless Cars Conference will be held at the Adelaide Convention Centre on Nov 5 and 6.