Sydney remains the powerhouse of Australia and its’ economy is outperforming the rest of the country for the third year running. 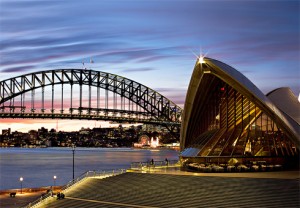 Sydney accounted for almost 30% of Australia’s total growth in the last financial year.

The Sydney economy grew by three per cent in 2014-15 generating AU$378 billion. The figure represents 30.3 per cent of Australia’s gross domestic product.

It is the third year in a row that the city has outperformed the rest of the country.

“In recent years Sydney has grown to become a major global financial hub,” says Darrell Todd, CEO of thinkingaustralia. “And its’ importance to the national economy is highlighted by these latest figures.

“But there is much more to Sydney than financial services. Growth is based on a wide range of industries that will continue to expand in coming years.”

Across the country economic activity varies from city to city and state to state.

The Brisbane economy grew at 0.9 per cent during the year. It is the third lowest growth on record.

Sydney and Melbourne together contributed the majority of Australia’s GDP growth in 2014-15 according to a new report by SGS Economics and Planning.

“The economy of the country is changing,” says Darrell Todd. “We are moving away from traditional industries like mining and resources. During this transition period some cities and states are having a rough ride.

“But Australia is a resilient country full of resilient people and the current slowdown in some states will soon turn back to major growth.”

Want to live and work in Sydney? Click here for more info: Skilled Migration to Australia