Iron Maiden to tour Australia • Are you thinking Australia? | thinkingaustralia | 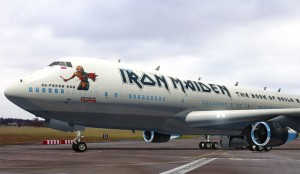 Rock group Iron Maiden will tour Australia and New Zealand in 2016 as part of their ‘Book of Souls’ world tour.

The British heavy metal band will play two shows in New Zealand – April 29 in Christchurch at the Horncastle Arena and the Vector Arena in Auckland on May 1 – before heading for the mainland for concerts in Australia.

The band and its’ road crew will arrive down under on ‘Ed Force One’, a Boeing 747 (pictured) flown by group singer Bruce Dickinson, who is a long-time qualified pilot.

Maiden’s new album The Book of Souls reached No 2 in Australia and New Zealand rock charts.

Bruce Dickinson says: “We haven’t played in Australia and New Zealand for a number of years and it will be a pleasure to play for our Antipodean cousins again, irrespective of who wins the dates with destiny at Twickenham!!”