Brisbane house prices are forecast to rise by 5 per cent in 2016, a slowdown in prices that is also occurring in many state capital cities across Australia. 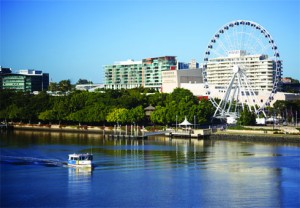 The area of Brisbane with the cheapest homes is Ipswich City where the average cost of a house is $327,000.

“The slowdown in house price inflation is great news for workers, families and anyone seeking to migrate to Brisbane,” says Darrell Todd, CEO of thinkingaustralia.

The average cost of houses in Southeast Inner Brisbane increased by 5.3% to $733,000. In Caboolture, Pine Rivers and Logan City prices have risen by up to 5%.

Demand for houses is greatest in the inner city suburbs where the average cost of a house is more than $800,000.

The total number of houses listed for sale in the city last year fell by 10.2%, while the number of apartments for sale dropped by 1.7%.

The further you travel out of the city, the cheaper houses become. Travel 10km or more from the city centre and houses cost an average of $550,000.

Travel 20km or more from the city and the average cost of a house is $400,000, according to the latest Residential Market Report from JLL.

The slowdown in property prices in many cities is noted in the latest Reserve Banks of Australia statement on monetary policy. Some geographic areas appear to be at risk of reaching a point of oversupply, particularly the inner-city areas of Melbourne and Brisbane, the RBA says.

Growth of national apartment prices have been noticeably slower compared to detached housing. Auction clearance rates, a timely gauge of housing market conditions, have also declined from very high levels. And national housing prices have fallen from their September 2015 peak.

Want to live and work in Down Under?