Tickets are now on sale for Arsenal's matches against Sydney FC and Western Sydney Wanderers. 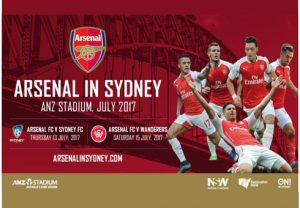 Arsenal FC will play Sydney FC on July 13 2017 and afterwards they will face Western Sydney Wanderers on July 15, 2017.

Arsenal FC star players including Mesut Ozil and Alexis Sanchez will probably not appear at the much-anticipated games Down Under.

The players will be unavailable as they will be representing their home countries – Germany and Chile – in the Confederations Cup that is due to take place between June 17th and July 2nd 2017.

Other players that will not appear include Arsenal FC captain Laurent Koscielny and Santi Carzola, both of whom will be out of their contracts in July 2017.

Ticket prices for the two matches at Sydney’s ANZ Stadium start at $39.

Despite some players not appearing, Arsenal will bring their strongest possible squad to play in Sydney.

Arsenal said in a statement this week: “Everyone at Arsenal is looking forward to coming to Australia next northern summer.

“It’s been a long time since we’ve been Down Under and will be a great opportunity to give our passionate fans the chance to see the team in action.

“The two matches against Sydney FC and Western Sydney Wanderers will be an important part of our pre-season preparations and we intend to bring our strongest possible squad.”

Arsenal legend and Under 15s team Coach, Freddie Ljungberg, arrived in Sydney last week to promote the premiership side’s ‘Arsenal In Sydney Tour’.
He said the players will be taking their two-game visit to Australia seriously.

Ljungberg told reporters: “The Sydney games will be a key part of our pre-season preparation and, as such, the players will be focused and wanting to do well”.

It will be Arsenal’s first trip to Australia in 40 years and continues a run of international superclubs playing in Sydney in recent years – Manchester United in 2013, Juventus in 2014 and Tottenham Hotspur and Chelsea in 2015.