Possum • Are you thinking Australia? | thinkingaustralia |

Possums are shy nocturnal animals that originally evolved in the rainforest where many species still live. They fill much the same role in the Australian ecosystem that squirrels fill in the northern hemisphere and are agile climbers.

There is a wide range of sizes ranging from as small as a mouse to the size of a large cat. Some of them, most notably the Common Bushtail Possum, can be spotted in urban gardens at night.

Gliders have a fur-covered membrane stretching between their wrists and ankles or wrists and elbows. Once they have gained enough height they can glide to another tree, and land on all four feet. The Feathertail Glider can glide 20 metres and its feet have serrated pads allowing it to cling to surfaces as smooth as glass. A Greater Glider can cover 100 meters in one glide, and can even change direction 90 degrees in mid-flight.

Cuscuses belong to the same family as bushtail possums. They are slow-climbers and do not leap about. In Australia they are only found in the canopies of northern Queensland rainforests.

Female Cuscuses have four nipples in their forward-facing pouch, and can raise one or two young at a time. The female Honey Possum may become pregnant soon after giving birth, but this embryo will not develop further until the young are weaned. 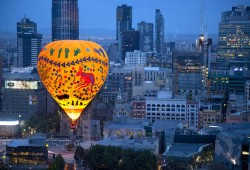