Platypus • Are you thinking Australia? | thinkingaustralia |

Sometimes called the Duck-billed Platypus, one of these curious creatures features on the reverse of the Australian 20 cent coin. Platypuses (or Platypoda) are monotremes, and like Echidnas they are the only mammals that lay eggs instead of giving birth to live young. It has webbed feet, a large rubbery snout, and dense waterproof fur. It also has electroreceptors which are thought to help it hunt for prey.

The male platypus has venomous ankle spurs which are used in territorial battles and fights over mates. The poison is not lethal to humans but produces excruciating pain and swelling that may last for several months. The venom can be lethal to dingoes, dogs and smaller domestic animals however. Males are around a third larger than females.

Platypuses are usually solitary nocturnal animals that live in simple burrows in the ground. After mating though, the female constructs a more elaborate burrow that may be up to 85 feet long, with its entrance about a foot above the water. They lay small leathery eggs similar to those of reptiles, then the female curls around them.

When the eggs hatch after roughly ten days, the small hairless young cling to the mother and are fed by the mother’s milk. Although she does not have nipples, the milk is released through pores in her abdomen. The young leave the burrow after three months, and are weaned at around four and a half months. The male takes no part in caring for its young. 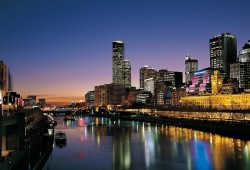