Dingo • Are you thinking Australia? | thinkingaustralia |

Dingoes did not arrive in Australia with Aboriginal people, but were probably brought by seafaring Polynesian traders at around 4000 BC. Dingoes soon spread across the continent and were adopted by Aborigines as a companion animal and to assist with hunting. They are probably decended from the Indian wolf, and can still be found throughout Southeast Asia, not just in Australia.

Unlike the domestic dog, dingoes breed only once a year, do not bark, and have permanently erect ears. They are usually a ginger colour, although some are black, and most have white markings on the chest, feet, and the tip of the tail. They have a more independent temperament than dogs, a narrower muzzle, and larger canine teeth. Interbreeding with dogs introduced by European settlers has ment that true dingoes are becoming less common in the wild.

Dingoes do not generally form packs, but travel in pairs or small family groups within defined home territories. Wild dingoes prey on a variety of animals, ranging in size from lizards and small rodents up to sheep and kangaroos. 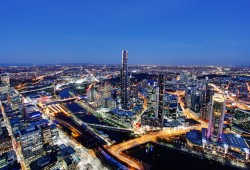